The visual storytelling of Run The Jewels

Home » The visual storytelling of Run The Jewels

Alongside the two antiheroes of Run The Jewels is a third, ever-present visual staple: the pistol and fist. This simple image has graced the cover of every Run The Jewels album, communicating very clearly what the duo are here to do. This image goes directly against more traditional hip-hop album artwork, which tends to feature a portrait of the artist in varying forms. By choosing a more symbolic art direction, the group sets the tone for their records to stretch beyond reality. This is supported by auxiliary imagery for packaging and album skits, which hint at the duo escaping hell.

The creation of the covers has been spearheaded by El-P, one-half of Run The Jewels, and recently, Tim Saccenti, a photographer and filmmaker who’s worked with El-P since his second album. However, both are quick to mention the contributions of numerous artists over the years, including illustrator Nick Gazin, who drew the first two covers and helped conceive the original logo, and, of course, Killer Mike, the other half of Run The Jewels. “I consider it to be sort of an art collective,” El-P says. “Different people have different moments in it that enhance it and turn it into what it is.”

I spoke separately with El-P and Saccenti about the history of Run The Jewels’ visuals and how they’ve been brought to life through sculpture and photography for their most recent albums. Here’s a combination of both interviews, which have been condensed and lightly edited for clarity.

El-P, you came up with the original logo design. How did that come about?

El-P: We knew we were going to release the record for free and that it was going to be self-titled. We really just wanted to strip all pretense out. And then I started to feel like, how can we get more primal? How can we say everything that we need to say without having to use words?

So I started playing around and sort of taking pictures of different things. I remember I took a picture of me holding up just some shitty chain that I had and doing the fist and pistol thing and sent it to Nick Gazin, an illustrator we met through Fool’s Gold. And I said, “This is it. This is the logo.” And that’s how it began.

What did you want the logo to convey?

El-P: The pistol and fist clutching the chain really meant, “Give me your fucking chain.” That was the first step in us sort of starting to define what this meant. Once we saw how powerful that was, we were like, “I’m not even putting our fucking name on this thing.”

It’s rare to stumble onto something that can use symbols for language that can be really easily understood. It’s not that easy to do. It was so powerful. It felt so real. It felt so obvious.

How did you decide to reinvent the logo for the second album?

Ultimately — and I’m trying not to be long-winded, but I am stoned — there needed to be an evolution that just sort of represented us. There was some injury and pain involved in this project, and that’s where the bandages came in. Something was healing or something was injured.

I noticed that you guys reworked an image from the Run The Jewels 2 era for the latest album. Tell me more about it?

El-P: In the previous Run The Jewels albums, we always have like an action scene in the middle of the record. And it was always linked to the Grand National, Mike’s favorite car. So that became the Run The Jewels mobile ever since the second one, which I think is when [Gazin] drew that crazy action scene. 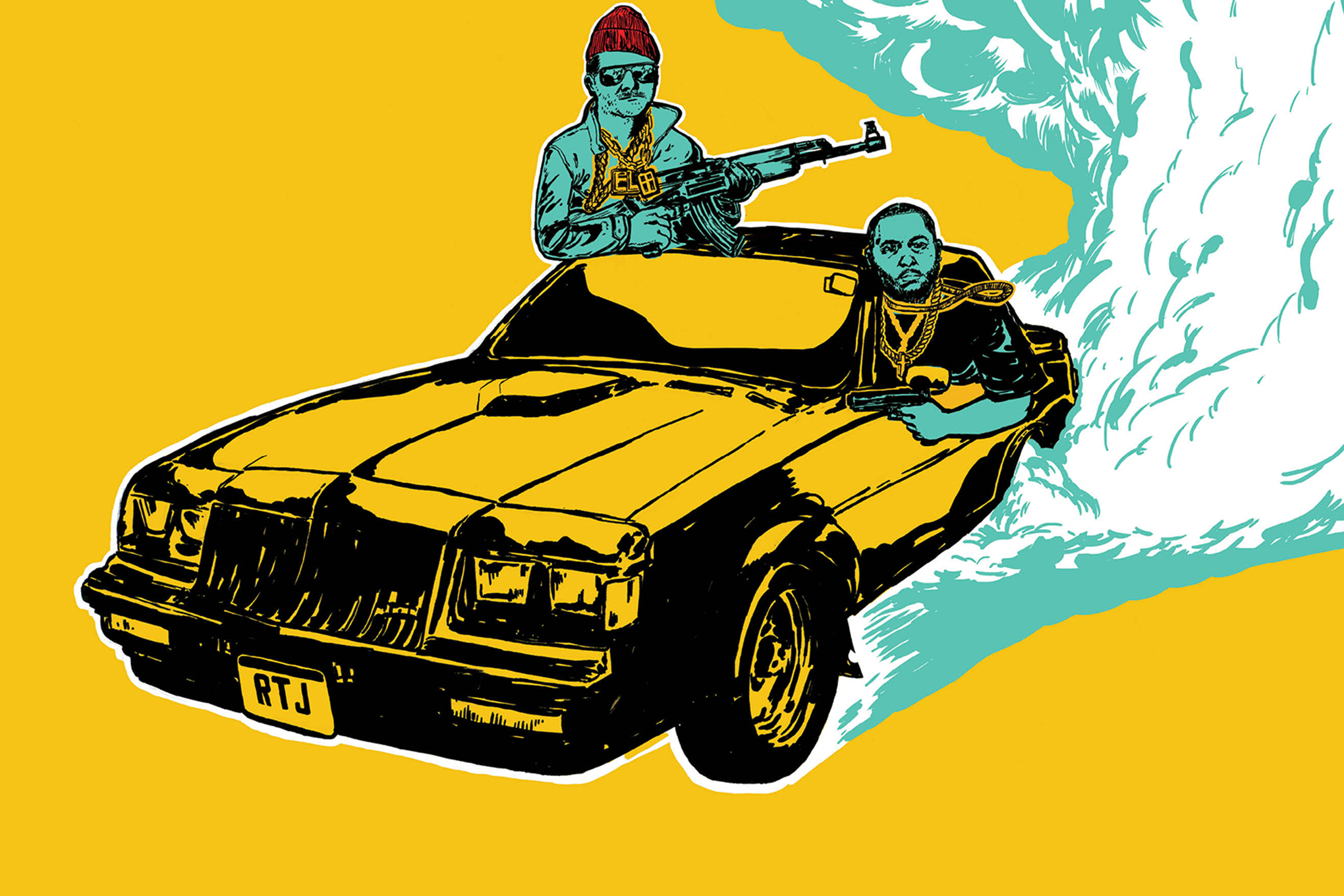 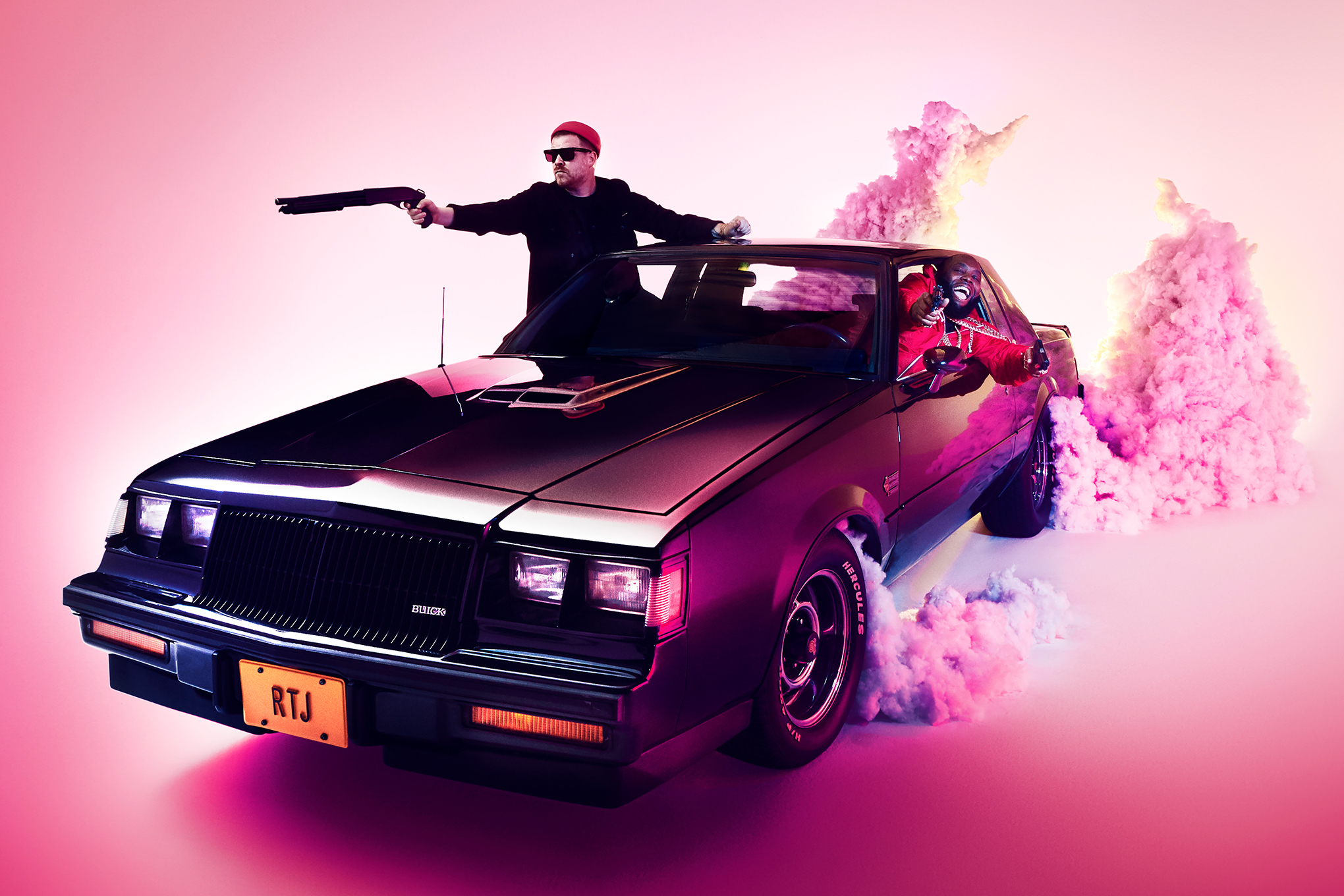 So how’d you pull it off?

Tim: I started referencing [Federico] Fellini films and Terry Gilliam films, these films that are futuristic but also have this theater quality to them. My set designer had some very unusual cotton-type industrial material that he could shape into the form of the smoke. We had to be very technical with it. Mike was advising this event, saying like, “You can’t have that smoke there. This looks like my car just blew up.” I don’t know this. I’m from New York.

We took the illustration and perfectly aligned it over top of a real car using a Canon 5D and a 35 millimeter SLR system. Because the shot is so wide, we needed to use this particular body and wide lens. Then we built this whole world of smoke around the car matching the illustration, totally in camera. Luckily, we did all this before Run The Jewels got there. I think it took about 10 hours to set up.

EL-P: It was just fucking unbelievable to see it come to life.

I was surprised to hear the logo on LP3 is actually a sculpture.

Tim: The album sounded just like something you would hear blasting out of a car in New York in the ’80s. We wanted to level up the imagery from illustration and bring it into the real world, so we had the hands sculpted into gold.

Those were sculpted by hand by an amazing sculptor in Brooklyn and then plated with gold. They’re actually real, and they weigh like 10 pounds each.

The chain is missing in this one. Why is that?

Now the goal was not to take something from anybody but to take your personal power to realize that the chain did not need to exist anymore. The gold chain was actually yourself. We made the hands gold because we wanted to reflect that sentiment.

Tim: We wanted to build this world out so I had the idea to make the hands gold. We’re bringing it into this very high-end reality and using the gold against the blue because the music felt kind of colder. Not as fiery but more widescreen. I shot them kind of like I was shooting a Porsche catalog, or something super rich-looking, and in hyper detail.

How’d you decide on this 3D, polygonal style for LP4?

EL-P: I had this interest in bringing the hands away totally from what they were known as. Turning it from a logo into something that harkens back to some of the most basic shapes. In other words, you don’t have to define fingers anymore. I wanted it to feel like something that you could dig up in a thousand years.

Back when I was a kid, the futuristic things you could imagine were sort of low polygon. Probably because of the fact that I grew up in the ’80s and saw movies like Tron and Dune. That kind of really broken-down, basic approach to putting shapes together simultaneously feels almost primal but also is rooted in the idea of our understanding of technology.

Tim: In my apartment, I have books on Jack Kirby, the illustrator, and Syd Mead. I looked at imagery from the 1984 Tron film, as well as some designs from the original Blade Runner. Syd Mead’s designs are very angular and brutal, and mixing that in with Killer Mike’s car — a muscle car from the ’70s or ’80s — it’s extraordinarily heavy. The lines are very brutal and harsh. It’s very boxy, and in a beautiful but terrifying way, almost like a hammerhead shark.

I sat down and did a bunch of test designs with the Rolfes brothers, longtime collaborators of mine. There were a lot of beautiful, amazing designs we had that just did not fit with the story or with the music. It felt like they would be amazing covers for an electronic act like Boards of Canada or designed for science fiction films. They were too glitchy or futuristic, and they weren’t emotional enough.

Tim: That was a creative challenge. People would see the cover and be like, “This is a cool 3D piece.” And we’d say “Okay, let’s shoot it again.” We wanted to make sure the texture was showing up. Some of the early photos didn’t have really enough texture to go with the album.

What’s it made out of?

Tim: We landed on a material that felt like a car. It was this super shiny black material meant to make it feel a little bit more like an artifact, like a Jack Kirby kind of thing, that had been left in space for millennia and then it just got discovered so was a bit scratched up.

We had it 3D printed. Then the models were taken to an auto body shop, painted with four or five coats of super black paint.

How did you get the texture to stand out in the photographs? The hands seem to be reflecting all different colors of light.

We shot that with a Phase One medium format camera system and Capture One software. We used Schneider lenses, so these are super sharp lenses, and it’s a 150-megapixel camera because we were trying to shoot it almost like a museum piece, capturing every detail of the artifact. We want people to know that it’s real. The tricky part with this was that because it was so shiny and the lines were so brutal and basic, it looked like it was 3D.

How were you able to retain all that detail?

Tim: For jewelry or cars, or other reflective luxury items where you can’t necessarily get all the light perfect in one frame, you shoot multiple passes with a locked off camera. Those images can then be brought to retouchers who layer various parts of each shot. So we did different lighting passes on the hands — one pass for the red light, one pass for the gold light — and then combined those plates together in Photoshop.

How does it feel seeing people connect so strongly with the new album?

El-P: It’s pretty touching and pretty mind-blowing. This is not something that we could predict or control, and it’s a huge, huge compliment and honor.

Now, of course, do I wish that some of the darker moments on this record weren’t the things that connect with how people feel right now? Absolutely. I wish that Run The Jewels was the fucking paranoid ramblings of two out-of-touchmen. When that day comes, I’ll happily start making dance records about silly little fucking stupid stories that mean nothing, and I’ll have a blast. It’ll just be fun.

We have fun with these records, don’t get me wrong. But it’s a double-edged sword. You realize, “Oh shit this is connecting with everyone right now on a really deep level.” And then you realize there’s no good goddamn reason referencing a man dying at the hands of a cop in 2014 should mean just as much in 2020. There’s no goddamn good reason.