Global Expansion, Regulations, and the Future of the Crypto Market: An Exclusive Interview With OKEx CEO Tim Byun

Home » Global Expansion, Regulations, and the Future of the Crypto Market: An Exclusive Interview With OKEx CEO Tim Byun

Cryptocurrency exchange OKEx, one of the world’s largest crypto exchanges with daily volumes close to $500 million, has had a good 2018. That’s in stark contrast to the market in general, which has not had its most glorious year — at least on the face of it.

In truth, the market’s price stagnation does not accurately reflect the progress being made in the space. Crypto seems to be losing the sheen of its novelty and is now in the long slog of proving itself by building the fundamental services and products that can truly disrupt our lives.

Exchanges have in this time been refining their platforms and adding features (stablecoins, security tokens, and decentralized matching orders are just some of the the ideas growing in popularity), and the enhancement of exchanges is as exciting as the development of DLTs.

The march towards mass adoption, constructive regulation, and seamless, accessible trading by exchanges has been steady, and 2018 has been memorable in this regard.

We interviewed OKEx’s CEO, Tim Byun, and asked him for his thoughts on precisely these subjects: the future of cryptocurrency, the exchange’s upcoming plans, and the state of the market.

Hot off the press is OKEx’s listing of the well-performing TRON token on their exchange, a  development that will only add to OKEX’s already excellent trading volume and service to over 100 countries across the world.

Byun said of the listing:

We are very excited to list TRX, as it has been a very active project with lots of promising applications in the way it uses cryptocurrency to pay for in-app media and entertainment content. We’re constantly seeking high-potential tokens to list on our exchange, and TRX certainly fits that bill.

TRON has been performing rather well in this tough time for market investors. Project Atlas, an effort with BitTorrent, and the unveiling of major dapp development leaves some very optimistic about the project — and the increased liquidity for TRON through its listing on OKEx can only buoy investors even further.

OKEX’s vision for the crypto space, which is to increase accessibility to the crypto market and create a global impact, sees them making a very wide effort in developing the industry. The availability of BTC Futures, which regularly hits over $1 billion of volume every day, speaks to their goal of making digital assets a mainstay of the global economy.

OK Blockchain Capital is a distinct project run by the team to support startups with truly innovative ideas. The team provides selected startups with capital, technology, consultation, and other resources to help them see their ideas come to fruition.

… our internal investment arm that invests in entrepreneurs and start-ups for strategic and/or financial and domain expertise. The OK family has made several investments and will defer to our public releases, including investments in SEED CX, Securitize, Mythical, and RnF Financial

To date, investments have been made in SEED CX, Securitize, Mythical, and RnF Financial Limited.

Becoming the Go-To Exchange Through OKChain, and Expanding into the Global Market

It is well-known at this point that Distributed Ledger Technologies (DLTs) are currently not in the best position to compete with Visa and Alipay, as far as transactional processing capability and scale are concerned.

This is the single most exciting problem in the space that is attracting an immense amount of research and development — which is approaching, though not quite near, a solution.

Several potential solutions have been proposed, not the least of which is Ethereum’s sharding solution, which is expected sometime between 2019 and 2021.

The OKEx team is adopting sharding technology into their blockchain, OKChain. This is their solution to the scaling problem, as OKChain will provide parallel transactional processing and also utilize the BLS multi-signature scheme to establish quicker validation.

The ledger is based on the Proof-of-Work consensus and will feature a token called OKB.

OKChain’s whitepaper details how the team is attempting to improve scalability: via enhancements to the storage, consensus, and network layer. It is well worth reading in full to gain an understanding of how specifically they intend to improve transfer rates.

OKCoin (OKB) is a distinct entity, separate from OKEx. The main agenda for OKB is to serve fiat-to-crypto services, whereas OKEx is purely focused on crypto-crypto trades.

OKChain is still in development, but Byun says that work is progressing well:

We represent OKCoin specifically, which is a regulated fiat-to-crypto exchange. OKEx is a separate entity focused on non-fiat, or crypto-to-crypto exchange. Nevertheless, I can share that the OKChain is progressing well, but we do not have any new news for OKChain and OKB, which will likely be a native token for the OKChain as well as having additional utility.

To compete with the most well-known of exchanges, like Binance and Coinbase, Byun and his colleagues have also expanded to some of the most significant markets in the world — the United States, Europe, and Korea. Japan is also on the list for 2019, but of more note perhaps is the recent announcement that OKEx will open up an office in Malta, otherwise known as the “crypto island.”

Several prominent blockchain startups and entrepreneurs have taken to the nation for its friendly and progressive approach to regulation. OKEx is working with Malta’s stock exchange in a project called OKMSX, which aims to bring another much-anticipated feature of tokenizing securities.

Byun sees a lot of potential in this effort:

We love the sound regulatory framework in Malta and are really excited to soon enable Euro-to-Virtual Financial Asset (VFA) pairs.  Looking ahead, we are also excited about OKEx’s partnership, called OKMSX, with the Malta Stock Exchange to list security tokens once proper security licenses and authorities are obtained.  It is great to see Malta make such a commitment to cryptocurrency and to developing a regulatory framework. We fully support its initiatives and encourage other countries to follow its lead.

From One Industry to Another 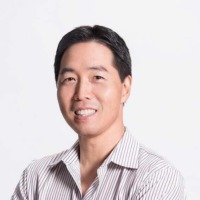 Byun was not always in the blockchain and crypto industry.

In fact, he has extensive experience in the entities that cryptocurrency directly challenges — Visa and the Federal Reserve Bank of San Francisco. Byun was drawn to cryptocurrency for the same reason many of its investors have been — lower costs, increased efficiency, and the absence of a dependence on central entity for its assumed value.

First of all, I am very fortunate to have been at the right place, at the right time given my rather traditional experience as a bank regulator at FRB and FDIC for 16 years and the AML Officer at Visa for five years.

I was attracted to the cryptocurrency space because of the massive potential for utilizing cryptography to ensure FINALITY (no chargebacks), TRUST (relying on math instead of a centralized party) and ACCEPTANCE (whether as currency or as stored value/digital good). Serving as BitPay’s Chief Compliance Officer in 2014 was an incredible period to grow with the ecosystem. Since joining OKCoin in 2016, I am still a very fortunate person to be bringing a regulatory-focused perspective to this fast-growing and quickly maturing ecosystem.

And with regulations, he sees hope for the market to grow:

Just look at Malta, Switzerland, Gibraltar, Japan, and Korea. It’s crucial that the industry works closely with governments and regulators worldwide to help foster the market forward while enforcing illicit activities. We have yet to see the full potential of blockchain technology nor cryptocurrencies nor digital assets.

It goes without saying that predictions in the digital assets market are nothing to write home about, oftentimes only recognized in hindsight and most of the times being downright wrong. However, there is a growing consensus that tokenized securities and stablecoins will be an important part of the ecosystem in 2019,

Byun, however, while recognizing the growth of tokenized securities, sees true disruption coming from somewhere unexpected — potentially a project that rivals the likes of Google and Facebook in terms of scope and services.

It won’t be security tokens that are mere asset-backed securities of traditional assets (even though this could be exciting and beneficial to Wall Street including as a superior feature to Collateralized Debt Obligations specifically). My guess is that we’ll see a few good projects transition to mainnet and demonstrate clear use cases that could be revolutionary (think a service like Google Search) or novel (think a service like Facebook)… we have yet to see crypto ecosystems equivalent to Google nor Facebook, but it’s coming.

As for the price of tokens? Byun has strong conviction:

We’re in a bear market and most recently a steep correction, which reminds me of the dot-com crash of 2000. I am confident that we will come out of this bear market with innovative companies that will lead the digital asset innovation, just like the innovative internet, ecommerce and social media of the post 2000 internet era.